The Lalakukulala rapper was signed to a 5-year contract with the label back in 2016 but from investigations, it has been revealed that 3 years into the contract, the rapper has departed the label.

Asides his IG page no longer carrying a confirmation that he is still signed to the label, a source close to the rapper also confirmed that he has parted ways and the departure was amicable.

Oladips rose to fame after he won Dbanj’s ‘King is here’ competition quickly became a favourite to many street music lovers with his punchline and rap style. 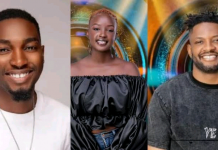 I Had Feelings For Jay Paul, Cross – Saskay