A Lagos State Traffic Management (LASTMA) official was recently shamed for driving against traffic along Oworonshoki expressway in Lagos.

Angry residents dragged him out of the car and dishevelled his uniform before dragging him around to the exhilaration of passersby. They were infuriated that the LASTMA official, who is among those arresting other motorists who go against the traffic law should not have driven against traffic.

In this exclusive piece, Gbenga Odunsi x-rays the appalling behaviour of the LASTMA officials, vis-à-vis their rules of engagement; captures the ordeals of motorists who are ill-fated victims of LASTMA officers.

“LASTMA officials have, on many occasions, harassed me without disclosing my offence.

“The officers also seized my motorcycle and, in turn, asked for money to get it released, threatening to take it to their office at Oshodi.

“Sometimes, even without disobeying traffic laws, these dare-devil officials will still harass you. They do this often, without shame.

Wasiu Akinde, a tall, slim, dark-skinned commercial tricyclist, probably in his early 30s laments, as he implores Lagos state government to enlighten LASTMA officials on their rules of engagement. 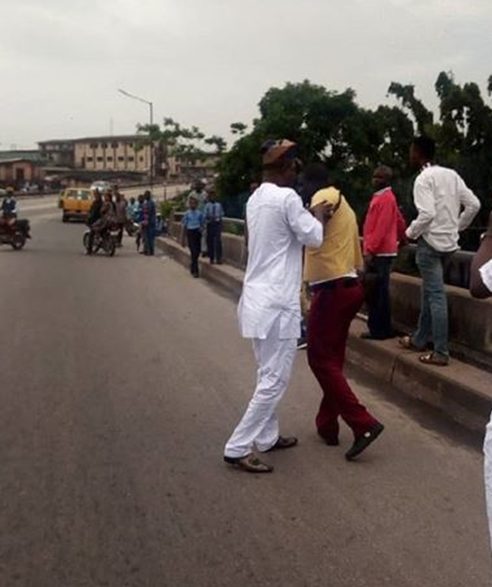 It is a well-known fact that LASTMA officials are an overzealous group with misplaced priorities.

Lagos State Traffic Management (LASTMA) was established, under the Ministry of Transport, a new government initiative back in the year 2000.

The outfit was formed to alter the state transportation system to ensure a free flow of traffic and reduce the number of critical accidents on Lagos roads.

The agency was created to not only trim down deaths and economic losses caused by road traffic accidents, but just as importantly, to ease conflicts that arise between drivers, congestion and delays on Lagos roads.

The initiative of LASTMA, chiefly, is to ensure that motorists who defy any of its rules and regulations are made to face the wrath of Lagos Traffic Law. 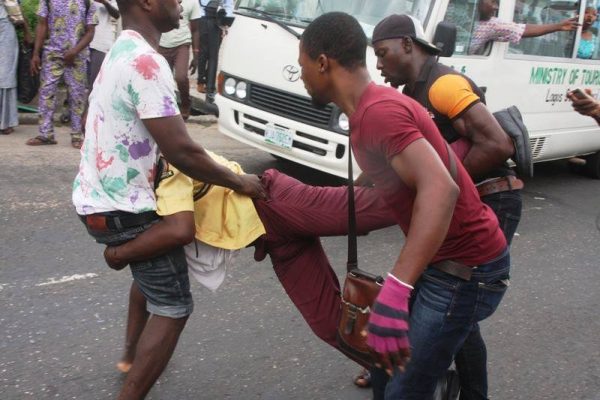 The Toils And Tears Of Extorted Motorists

The fear of LASTMA officials is the beginning of wisdom for Lagos motorists.

When asked if he could say one or two sentences about the activities of LASTMA officials on the road he plies daily, Wasiu Akinde — a tall, slim, dark-skinned commercial tricyclist, probably in his early 30s — frowned at the question. Apparently, the mere mention of ‘LASTMA’ ignites fear and hatred in him.

“LASTMA officials have, on many occasions, harassed me without disclosing my offence.

“On one occasion, the officers said I did not part my ‘keke’ properly before picking passengers, he adds, briefly raising his eyebrows to elaborate his point.

“After delaying me for one hour, they collected N5,000 from me.

“On other occasions, they just chose to bring out one unnecessary thing, and claim it is an offence.

“Sometimes, even without disobeying traffic laws, these dare-devil officials will still harass you. They do this often, without shame.

“Most of us are used to them. We only feel there is a need for government to educate and enlighten them on how best to do their job.

“They have really become a public nuisance.”

LASTMA Officials Station Touts To Collect Bribe On Their Behalf

Sitting dejectedly on his motorcycle at a junction opposite Alagomeji in Yaba area of the state, a commercial motorcyclist, who simply identified himself as JBoy, narrates his terrible experience in the hands of these dare-devil officers.

In the next three minutes or thereabouts, he would give blow-by-blow details of how a LASTMA official connived with a tout to fleece money from him and other commercial motorcyclists.

“He say I drop passenger for where I no suppose drop.

“Walahi dis officer hold my shirt from back; Na God even save me dat day.

“Nothing wey I fit do cos he don seize my key. I don beg beg, he no gree, time dey go, and you know say for this our Lagos, time na money.

I squeeze the money for the agbero hand. Na agbero com give me key sha.

“All of them no dey collect money directly. You go pay through their agbero before dem free you.

In this conversation, Jboy posits that traffic officer have touts who work for them. He is of the view that the yellow and red uniform officers try to play safe; they don’t talk…incase you have a recording gadget with you. Their touts do the negotiation on their behalf. 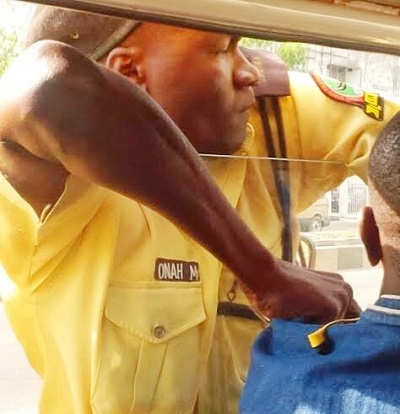 With an inquisitive who-are-you look, Funke Sotimirin — a dark, plump lady donning in a blue suit and skirt — welcomes the journalist with a stern look.

Mrs Sotimirin, a lecturer at the Yaba College of Education, shares her encounter with LASTMA officials stationed at Jibowu roundabout.

According to her, two officials waylaid her some weeks back. Her offence was that the lady at the passenger’s seat was fixing the seat belt when the car was already in motion. She narrated that one of the officials attempted to force his way into her car, but failed. On sighting this, the other official began to drag the car steering with her, in the middle of the road.

She was forced to park her Honda Accord car in the middle of the road, causing traffic gridlock to other road users. After all threats of towing her vehicle to their Oshodi office, she was asked to cough out N5000 to redeem her car keys. This money, Information Nigeria understands, did not go into government coffers.

Mrs Sotimirin expresses disappointment in the activities of the traffic regulation officers. According to her, the agency was set up as a corrective measure on Lagos road, but the reverse has been the case. The officials hit the road only to make illegal money for their pockets. The Yaba Tech lecturer concludes that “they do their job well, but they tend to appear lazy. They feel they can pick on just anyone.” Sometimes, You Don’t Know The Source Of Some People’s Anger

“What is their qualification?”

“Were they trained to control traffic or constitute nuisance on major roads?

“Who asked Sanwo-Olu to increase their allowances?

These are the questions that welcomed the journalist’s when Ogunleye, a tricyclist, was asked to bare his thoughts on LASTMA officials and how well they perform in their duties.

Ogunleye said okada business in the state was no longer eye-catching because LASTMA officials are out to ensure commercial motorcyclists do not go back home at nights without extorting all the money they have made for the whole day.

Ogunleye further laments on how LASTMA officials fight, and sometimes beat up motorists; use offensive language on people, and exhibit aggressive traits while discharging their duty. He added that the officials are quick to impound bikes and vehicles — with reckless abandon — without disclosing their victim’s offence.

Ogunleye wants LASTMA to enlighten Okada riders on traffic rules to enable them stay out of trouble with the agency’s officers. A LASTMA Official Clears The Air

Reacting to all the above-mentioned allegations against LASTMA officials, pari passu the operations of the agency, an official, Lala. B, says it is wrong to assume all officers of the agency are corrupt.

The tall and light-skinned officer says although, the agency harbours both good and bad officers, he, however, stressed that the agency is in the process of rooting out all the bad eggs in the service.

“No officer has any valid reasons or excuse to extort drivers for whatever offence.

“Members of the public must also desist from making any form of payment to LASTMA officials. More often than not, motorists are quick to bribe our officers when they go against traffic rules. This is not right; drivers must ensure their vehicle documents are up to date.

“Motorist and Lagosians as a whole must endeavour to obey traffic rules in order not to endanger the lives of other road users. When you comply with all these, you won’t have reasons to engage our officers in any discussion whatsoever.”