Home Politics Buhari Is Not The Father Of The Nation, He Is The Father...
Facebook
Twitter
WhatsApp

Former Aviation minister Femi Fani-Kayode has taken to social media to respond to Dele Momodu over his comment about President Buhari being the ‘father of the nation’.

Momodu, via his Twitter, handle while responding to the ‘explosion’ in different parts of the country, said that only the President can curb all of the explosions as he is ‘the father of the nation’.

ALSO READ: COZA: Skales Raises Alarm That He Is Been Threatened By Pastor Biodun

“Only one man can stop the imminent explosion and that is the father of the nation, President Muhammadu Buhari” he tweeted.

This did not sit well with FFK who has since replied Momodu.

“Buhari cannot stop the imminent explosion because he is the cause of it! 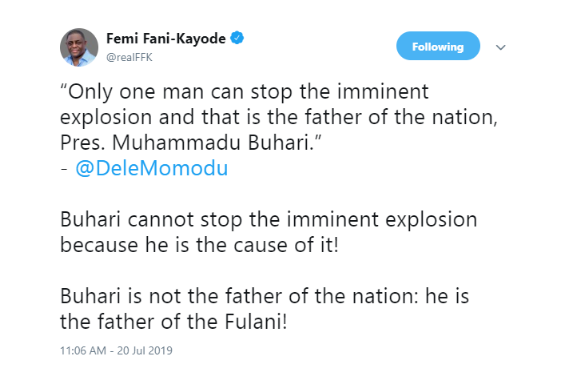