Award-winning star, Burna boy has created a Telegram group chat for his fans to have a better experience in discussing his newly released album, African Giant.

READ ALSO: Burna Boy Says He Is Not Rich; Admits There Is Poverty In Nigeria

The album was dropped on Friday and fans have been talking about it, nonstop.

He created a Telegram group for his fans to connect and discuss the albums, what they like or dislike about it and so on.

He announced the Telegram group on his Twitter page, saying that the telegram group was opened to any fans who wanted to join it till 6 pm.

He said “created a group for fans to discuss the album! Strictly for the album. If you have telegram join up closing up the group at 6 pm. 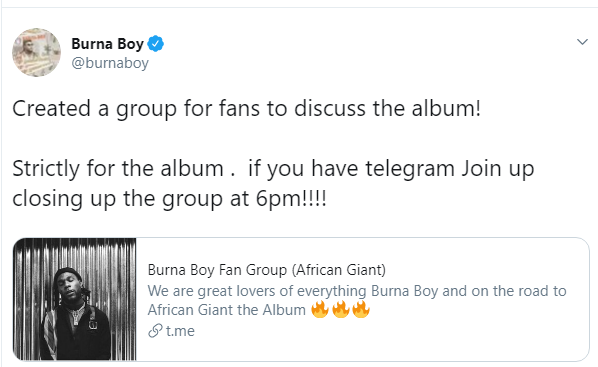