Talented Nollywood actress, Toyin Abraham, had her traditional marriage with actor, Kola Ajeyemi, according to the now-viral photos on social media.

Recall that the duo had earlier denied being in a relationship.

Kola on his part came out to place a serious curse on anybody “carrying the rumor” that she is in a romance with Toyin.

Information Nigeria can confirm to you that they are now officially married.

Toyin was previously romantically linked with actor, Niyi Johnson, but we can not ascertain whether they got married.

Little is relatively known about Kola Ajeyemi, her new heartthrob who features prominently in Yoruba movies. 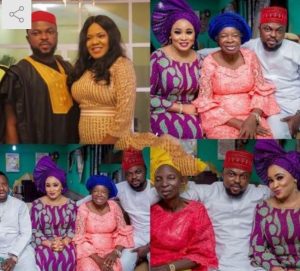