Brazil has been crowned as the new champions of South America after they defeated Peru 3-1 to win its first Copa America title since 2007 on Sunday.

Brazil took the lead after Riberio Everton’s opener, but they were pegged back a minute before half-time when Paolo Guerrero scored from the penalty spot after Thiago Silva handled the ball. 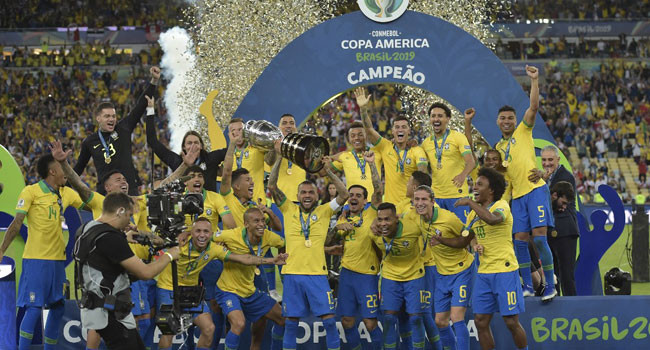 The goal was the first Brazil had conceded in six games in the Copa América, but they retook the lead moments later after a well-worked move from midfield. Gabriel Jesus scored a decisive goal after the penalty, Richardson’s late spot-kick sealed Brazil’s spot as winners of the South American title for the ninth time.

Also Read: ‘My Future As Cameroon Coach Is Not Important’ – Clarence Seedorf

It was Brazil’s first major title since they won the Copa América in 2007 and the first for their coach Tite, who took charge of the national team three years ago. Peru has not won the tournament since 1975.

Argentina finished third in the competition after defeating Chile 2-1 on Saturday in a keenly contested match that saw Lionel Messi sent off for the second time in his career.