Controversial actress, Cossy Ojikakor who is currently in the hospital for her leg surgery took out time to dance while on the hospital bed.

The actress, who is still in hospital after she suffered a horrific fall, was filmed twerking while on her hospital bed. In the video, she knelt on her bed on all fours, and with her backside to the camera, she began twerking.

READ ALSO: Ik Ogbonna’s Wife, Sonia Shows Her Massive Butt As She Relaxes At The Beach 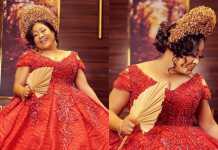