The Pentecostal Fellowship of Nigeria (PFN) has concluded its investigation into rape allegations against COZA pastor, Biodun Fatoyinbo.

In a letter sent to singer Timi Dakolo, the Christian umbrella body said it has constituted a committee to look into circumstances surrounding the allegations levelled against Fatoyinbo by his wife, Busola Dakolo.

According to the letter, the committee, which has Rev. Wilson Badejo as Chairman, with Bishop Vincent Iyawe and Rev. Collins Ilechukwu as members, is tasked with the responsibility to establish the veracity of the claims and recommend appropriate sanctions where necessary.

Also Read: Herdsmen Already Know That Their Murderous Actions Will Have No Repercussion – Reno Omokri

Reacting to this development, the advocacy group, ‘Not In My Church’, which has helped to share the viral stories of survivors and kick-started a national conversation, has appealed to all those who might have suffered the same fate in the hands of the COZA minister, to come forward and share their stories.

The group has promised to provide any victim willing to come forward access to professional counseling.

The advocacy group says it is expected that beyond this committee, the PFN and the Christian Association of Nigeria (CAN) will have a publicly accessible Code of Conduct and a standing committee to review issues of abuse of power leading to different types of abuse in the church.

The organization has further made a formal petition the PFN to implement certain strong measures that send a clear signal to the church and to society about the seriousness of sexual violence, and the actions the church will not tolerate under any condition.

Amongst the demands of the group include the following:

i. The accused steps down from the pulpit for 6 months – 5 years, depending on the gravity of the offense, during which he cannot preach on any other pulpit, or until a conclusion of a legal process.

ii. The accused and their spouse take a leave of absence from the Board of Trustees of the church for as long as they are off the pulpit.

iii. The accused apologizes publicly – specifically to those whose allegations are in the public domain and generally to others that have been sexually abused or otherwise by virtue of their position as a pastor.

iv. The accused enrols in a sexual abuse programme at a globally reputed centre. 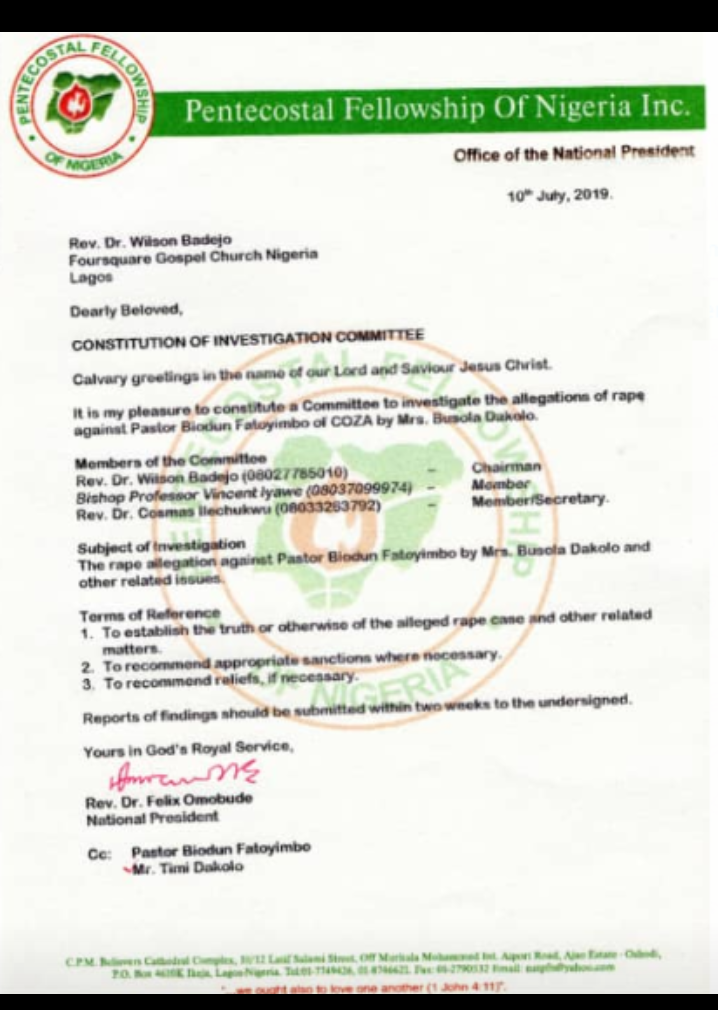