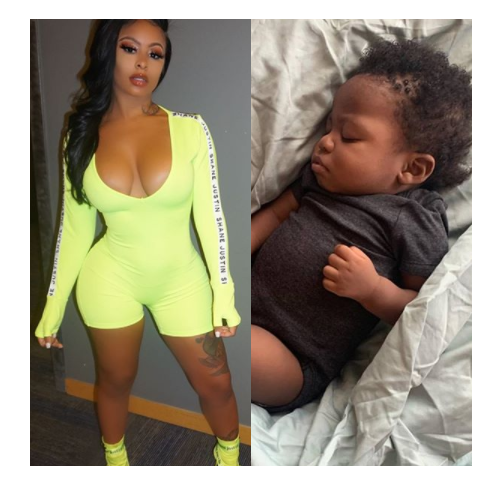 A homeless mother has opened up on how Alexis Sky found her and her baby and took them off the streets.

Reality star, Alexis Sky, 25, speaking on the issue stated that she was on her way to breakfast when she saw some homeless people on the street.

She said she started to hand out money to some when she saw a woman and her baby boy and decided to help them out greatly.

“I’m still trying to wrap my head around everything. I’m so open and honest about my struggles. And lately, things have been very hard. I’m a single parent and I had NO JOB. I have been trying as HARD as I can! I got evicted from my apartment Friday with nowhere to go! I rarely talk to my family or have real friends so I had NO support system.

“By the time I picked my son up from daycare, all the shelters had no vacancy and weren’t accepting intake until Monday morning. I sat outside of Atlanta Union Missions Women and Children’s Day Shelter feeling defeated. I talk a lot of positivity but at the end of the day, I’m HUMAN with emotions.

“I told myself that in order to not slip into a darker depression I had to change the way I was thinking or viewing the situation. Along with those positive thoughts negative came too, like you’re a bad mother and you are a bad person and no one would love you enough to help you.

“I still made sure to not let those negative thoughts overpower me. The first miracle was an older woman who slept outside for years had a brand new cot and kids blanket. I never saw a bed out there before! She was so nice to me despite her mental state. And the weather was not bad, honestly, I believe my son thought we were camping out.

“We were always home in my apartment since he was born. Now Sunday is here. I’m feeling better because Monday is around the corner. I prayed to God and left it there. A lot of different organizations were pulling up giving us food, toiletries, and etc. I even got a brand new tent for the night. A car pulls up and a lady rolls down the window.

“At first, honestly, I thought, she is really pretty. Then I realized, it was @alexisskyy_. She saw my son and I think she sympathized and was concerned for him. At first, she offered to buy him what he needed diapers milk etc.

“Then she smiled and was like” Can I take him?” I just felt a rush of relief. And usually my son is glued to my side but I knew I could trust her. I just couldn’t stop crying. She did what she said she would and more. I have a hotel now and I found a job today.

And orientation tomorrow. Angels do exist. Thank you, Alexis. I can never repay you. #alexisskyy”