Nigerian multi-talented rapper and father of one, Ice Prince Zamani has taken to Twitter to reveal his fear to love again, perhaps, as a result of the trauma he had been through with women and relationships.

According to reports, the singer once dated Eva Alordiah who was his first girlfriend when he moved to Lagos in 2009.

Things didn’t work out, he moved on to Ghanian actress, Yvonne Nelson but they broke up due to busy schedules.

It seems he had a thing for girls named Yvonne as he dated the fashion designer, Yvonne Nwosu but the relationship was short-lived.

The singer was also romantically linked to a French-Ghanaian lady, Maima in 2014.

It was reported that this is the longest relationship that the Nigerian artist has been in since he became a celebrity.

However,  they eventually went their separate ways when rumours about Maima seeing other men broke out.

Scared of getting his heart shattered, the singer took to the microblogging platform to pour out his emotions. 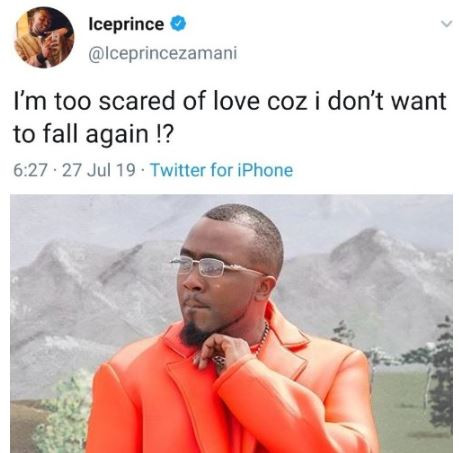