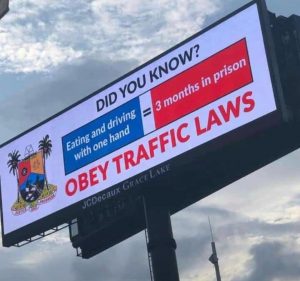 A billboard has been spotted in Meiran area of Lagos state where-in the state government stipulates a 3-months jail term for offenders caught eating and driving with one hand.

Under rule 148 of the Highway Code, it states that “Safe driving and riding needs concentration. Avoid distractions when driving or riding such as eating and drinking.”

As stated above, the highway law does not necessarily point driving and eating as a traffic offense but it sights that one should do with such activity that can lead to distraction while at the back of the wheel.

We hope Lagosian adhere so we don’t have a congested prison.