A Twitter user @mss Raidah has shared the story of how a man who doubles as her aunt’s husband murdered his wife, removed her kidney, heart and also cut off her tongue.

Read also: Woman Who Murdered Her Husband In Ibadan Granted State Pardon After Spending Only Two Years In Jail

According to the user, the incident happened in Mubi area of Adamawa but the case has since been taken over by the Adamawa state’s command of the police.

Until the wife’s demise, they were said to have been married for over 16 years.

shared by the user below; 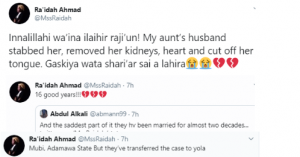