Famous indigenous rapper, CDQ, has taken to his Twitter handle to address a ‘letter of concern’ to the Inspector General of Police, as he narrates his ordeal in the hands of SARS officials.

The rapper narrated his ordeal with SARS officers at Osapa London in Lekki, Lagos, revealing that he and his convoy was threatened to be shot by a SARS officer.

CDQ also revealed that the SARS officers who threatened to shoot him and his crew, also said nothing will happen after they carry out the act.

The Head in-Charge should give proper training to these people… I had a terrible encounter with some illiterate Sars on Friday @ Osapa London Lekki by the Shoprite Road, threatening to shoot everyone in my convoy, including myself, and openly said nothing will happen that they don’t care about anybody… scaring young girls and boys with guns… the incident still baffles me till now

I’ve never in my entire life seen such happening in other coutries.. Just only in Nigeria. Why molest people anyhow with guns [email protected] 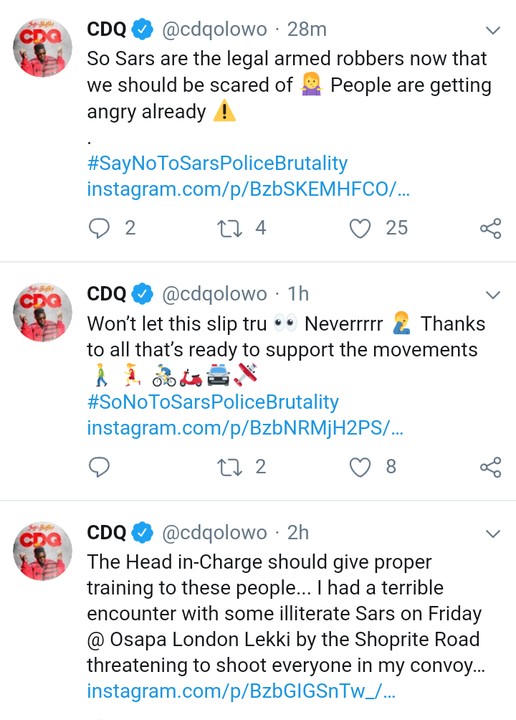 Before now, Nigerians have been sharing their stories of pain and unpleasant experiences with SARS officers. In this regard, Nigerians have called for the outright scrap of the security outfit.