Reports claim the operatives of the Nigerian Police are pressuring the Dakolos to sign a paper, reportedly sent by the Inspector General of Police, Mohammed Adamu, from Abuja.

According to SaharaReporters, the document states that the rape allegation made against COZA founder and senior pastor, Biodun Fatoyinbo are false and it was made to tarnish the image of the man of God.

According to a source:

“The men are harassing the Dakolos and trying to force them to sign a document from the Inspector General Of Police, Mohammed Adamu, stating that the confession made by Busola Dakolo is targeted at tarnishing the image of Biodun Fatoyinbo, pastor of Commonwealth of Zion Assembly in Abuja, a move the Dakolo’s are vehemently resisting.” 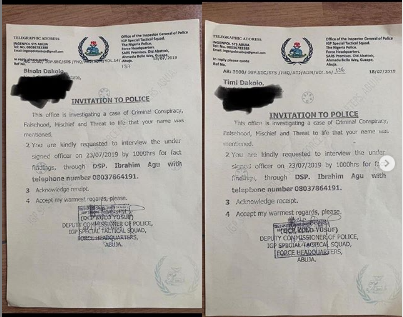 Information Nigeria recalls the singer raised an alarm after noticing strange men with guns outside his gate.

However, the singer has been rescued thanks to one of his followers.