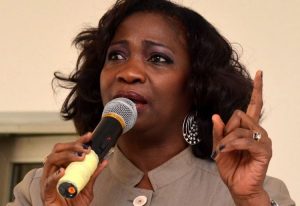 Nigerians have taken to their Twitter handles to fire heavy shots at Abike Dabiri for coming out to condemn Senator Elisha Abbo for assaulting a lady at a sex toy shop whereas she kept her cool when Ganduje was caught on tape allegedly taking a bribe.

To think that this PDP guy .was said to have “defeated”one of our most respected female parliamentarians, Senator Binta Masi Garba. The Senate must not protect him. He should be charged . The footage is enough evidence . He deserves to be in Prison https://t.co/6i944p55sj

https://platform.twitter.com/widgets.js
What Nigerians are saying:

Just imagine this nonsense. You people get drunk on your hypocrisy. Tueh. He is wrong, but don’t bring useless party sentiments to this abeg. A mace thief is currently the deputy Senate president, Ganduje? Should we keep going? Just sit this one out https://t.co/OQdP0nhs0c

YOU HAD TO POLITICISE THIS❗ Now he should be charged bassed on a tape evidence & as emphasized by u because he is a PDP& defeated APC❗D same tape evidence that was inadmissible on Ganduje’s‼ Fear God my sister, this APC egbekegbe has drained you of values❗ https://t.co/UDvZfYtIrk

@abikedabiri Abdullahi Umar Ganduje was an “APC guy” when we saw his stuff $5m in his babanriga. Did you speak about it then? Or you conveniently lost your voice? https://t.co/e9ApncuBWt

Unnecessary first sentence about his political party, esp as your party has Omo-Agege and Ganduje. https://t.co/7QisWTRrcA