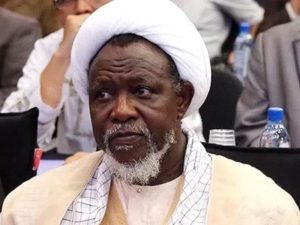 Members of the Islamic Movement of Nigeria, yesterday, stormed the premises of the National Assembly to protest the release of their leader, Sheikh Ibrahim El-Zakzaky, who has been in DSS custody since December 2015.

Addressing the protesters, House Leader, Ado Doguwa, promised to get his colleagues and superiors in the Senate to look into the continuous detention of Shiite leader, who has been accused of homicide, unlawful assembly, and disruption of public peace.

Read Also: Shiites Give A Drawing Of Jesus To Christians In Bauchi To Promote Peace

“This place called the National Assembly provides a window where you come and ventilate your concern and anger. But I assure you, I give you my commitment and the commitment of this institution, that we will address this issue that you raised.

“And in promising you, I will collect the contacts of your leaders. And by the time I am able to convince my colleagues and superiors, we will get back to you and discuss further.’’

This is not the first time Shiites have taken to the street to demand the immediate release of their leader.

In 2018, the Nigerian police confirmed the arrest of 60 Shiite members during a violent protest in Abuja.