Nollywood actress, Tonto Dikeh, has taken up a campaign against the rape of a minor.

Tonto Dikeh is protesting, to ensuring that the girl and her parents get justice.

According to report, the police are said to be pressuring the girl’s parent to drop the case.

The case has, however, been adjourned to October 3rd for both the prosecutor and defendant to tender more evidence.

The accused was denied bail and sent back to prison.

As a result of Tonto Dikeh’s effort, celebrities, including Funke Akindele, BBNaija Nina, Mercy Aigbe, Waje, and others have hailed Tonto Dicke’s campaign by dropping comments in her Instagram comment box.

Watch the video of the campaign below: 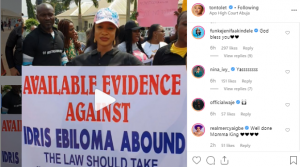