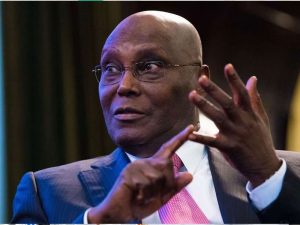 The former vice president who spoke via a statement he released today said all the cases the EFCC are bringing up against the former governor have all been investigated and judged in the past.

“I believe it is wrong to use the instruments of state to persecute political opponents.”

“Saraki is one of the most investigated politicians in Nigeria. He has been investigated and prosecuted all the way to the Supreme Court and has prevailed against his accusers. It was expected that that should have been the end of the matter.

“However, the revival of previously investigated cases and the fact that Dr. Saraki was politically opposed to the administration of General Muhammadu Buhari seems to give strong grounds for objective bystanders to conclude that his current travails have gone beyond prosecution and are now tending towards persecution.

“The laws of the Federal Republic of Nigeria are made for all and we fought for democracy so that the powers of the state would not be used to suborn tyranny and oppression.”

“I urge all Nigerians, and especially those tasked with upholding the constitution and the laws of the land, to note that silence in the face of oppression is akin to acquiescence. I, Atiku Abubakar, will always stand up for the constitution and Nigeria,” he concluded.