According to the Twitter user, the victim was forced to sign a settlement form against her wish.

The victim who cried on the phone said she was “forced to agree for settlement”. Please,a dangerous pedophile is on the loose, tweet, share and repost this so that the authorities can take appropriate action. Harrison can be contacted via 09068773333 [email protected]

herein is the settlement agreement prepared and duly signed by the lawyer who ought to defend the victim, the suspect’s signature and other witnesses. They collected N370,000 and other undisclosed amount and set the perpetrator free. What a world we live in… The14-year old

case over to a lawyer who happens to be part of his NGO, Rivers State Representative and got back to Delta State to handle other pending issues. The lawyer teamed up with the suspect’s family and sweet-talked the victim’s father to accept money and forget about the case.

quickly left Asaba for Portharcourt, carried out a thorough investigation and reported the case to the Divisional Police Station, Elelewon. The suspect was arrested, the medical director’s wife was also arrested for compounding felony and the case transferred to SCID. 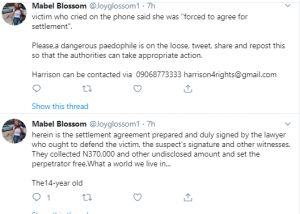