Universal Music Group(UMG) record act, Tiwa Savage, is currently a trending topic on social media after a photo of her recent stage performance, where she flaunted her tit surfaced.

The photo has sparked reactions from celebrities within the entertainment industry such as Cee-c, Anita Okoye, Korede Bello, and the rest. 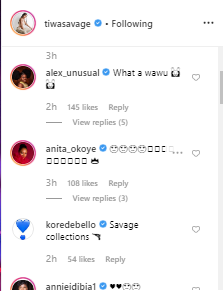