Apostle Johnson Suleman, the president of Omega Fire Ministry, has revealed that the embattled publisher of Sahara Reporters, Omoyele Sowore, mocked his prophecy earlier this year which stated that a presidential aspirant would be arrested.

According to the respected cleric who spoke via his Twitter handle, he said he gave the prophecy as the 21st for the year.

However, he went on to call for his unconditional release.

“I mentioned this as the 21st prophecy for the year..the same man whose website insulted and mocked the prophecy is detained..the govt should release him..the killer herdsmen walk free and you detain a man who is unarmed.wrong.. pic.twitter.com/Qp3npfJCzm 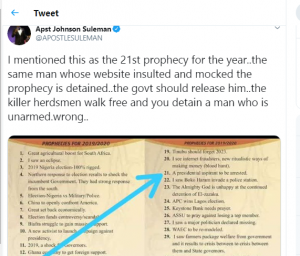