Apostle Johnson Suleman, the general overseer of Omega Fire Ministry, has shared that it is wrong to be in an abusive relationship.

Speaking via his Twitter handle, the cleric added that anyone can feel otherwise, but not by coming to his timeline to insult anybody.

He further said anybody who tries such would be blocked from viewing his page.

The respected cleric submitted by saying people have lost so much to abuse and nobody should stay in such an environment.

I repeat, it’s wrong to be in an abusive relationship..if you feel abuse is not condemnable, then good for you..don’t come insulting anyone on my TL..I have said it that I maintain a sane handle..we will escort you out of here with a loving/generous BLOCK.

People have lost their lives, esteem, dignity to  abuse.you don’t have to remain there..you need to be alive to serve God. A CORPSE CANT BE A GOOD CHRISTIAN.some folks don’t deserve to be in a relationship, they should be by themselves. 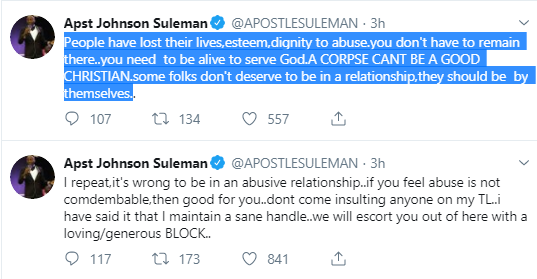