Femi Fani Kayode, a Peoples Democratic Party(PDP) chieftain, has stated that clearly, what IPOB members did to Ike Ekweremadu, a former deputy Senate President, in Germany is a pointer that the people of the south are getting angry.

Fani Kayode advised Ekweremadu to either stand up and defend IPOB members or stand aside.

Fani Kayode made this known via his Twitter handle.

What happened to my friend and brother Sen. Ike Ekweremadu in Nuremberg, Germany at the hands of IPOB is an eye-opener and clear signal to every political leader in southern Nigeria! The people of the south are getting angry and you either stand up and defend them or stand aside!

See what he tweeted below: 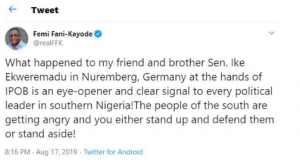