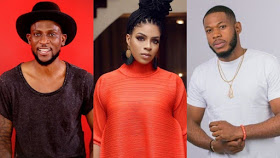 During a conversation with Seyi, Venita said she feels Omashola and Frodd are having a pissing contest because of her and she initially found it funny.
“I did initially, but now I don’t.
“I feel like it will soon get out of hand,” she said.
Speaking further, Venita said she actually enjoys Frodd’s company more and thinks Omashola is more aggressive.
Also Read: “There Will Be No Afrobeat Without D’Banj and Don Jazzy” – Teebillz

“I’m starting to feel uncomfortable and because Frodd get a sense, his tone, he’s easier to be around.

“But oga (Omashola) is a lot more aggressive and a lot more loud and I’m like ‘bruv y’all need to stop this shi*t,” she said.
Venita later went on to clear the air with Omashola as she wanted peace.