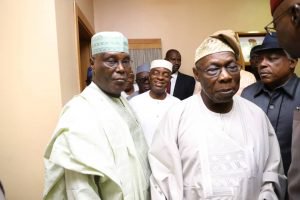 Former Vice-President Atiku Abubakar has stated that the Buhari-led administration is desperately trying to accuse ex-President Olusegun Obasanjo of a crime so as to silence him.

In a statement on Monday, Atiku’s media office said that including Obasanjo’s name in the list of tax defaulters by the Federal Inland Revenue Service (FIRS) was an attempt to blackmail him.

“For the avoidance of doubt, Mallam Babalele Abdullahi, Atiku Abubakar’s son-in-law, did not donate any money in cash to the Olusegun Obasanjo Library. Yes, he did facilitate a donation of fifty million naira to the Olusegun Obasanjo Presidential Library, but so did many other individuals, including civic-minded traditional rulers, state Governors, bankers and captains of industry.

“This is because the Olusegun Obasanjo Presidential Library is a non-governmental organisation that plays a pivotal role in promoting peace and stability in Nigeria, and that should be applauded.’’

Referring to Buhari, the media office said unlike “another past leader, who did not improve himself or Nigeria after leaving office, but sat down nursing grudges and plotting revenge, former President Olusegun Obasanjo improved himself and Nigeria by authoring books, founding international think tanks and engaging in peace and capacity building efforts’’.

“The truth is that there is desperation on the part of the current administration to rope in former President Olusegun Obasanjo into a crime as a way of silencing his voice, which they see as the preeminent critical voice against the misrule that they have foisted on Nigerians.

“This is why they asked the Federal Inland Revenue Service to falsely and libelously include his name in a published list of tax evaders, along with the names of other Peoples Democratic Party sympathisers, such as prominent international singer and pride of Nigeria, Davido, who played a prominent role in PDP’s gubernatorial campaign in Osun state, for which he is being punished.’’