The singer’s performance during the show was so lit that celebrities couldn’t help but share parts of his performance on social media and it has been getting some good reviews from prominent people.

Prominent in the list of people who hailed his performance is Don Jazzy, his former record label owner, who described him as the ”greatest.”

Watch the video of his performance: 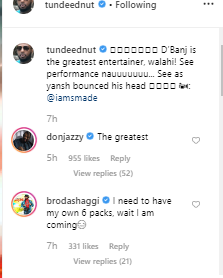