Adeniyi Johnson, Toyin Abraham’s former husband, has drawn reactions from notable Nigerian celebrities shortly after congratulating his ex-wife and new husband on the birth of their new child.

Adeniyi, who took to his Instagram page to reel out his congratulatory message to the duo asked God to bless the baby, the mother, and the father.

His message prompted celebrities such as singer Jaywon, actress Ibinabo Fibresima, actor Monsuru Omo Alfa and co to take to his comment section to react by hailing him for taking such step.

Monsuru in his reaction said: ”You just show the real you brother.”

Congrats on the arrival of your baby.. Mr &Mrs Ajeyemi …. He shall be a source of joy to you ….. God bless the baby, the mother and the dad… 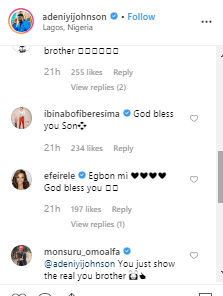