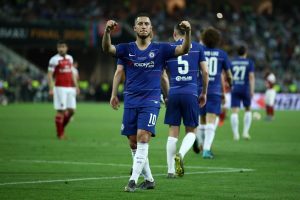 Chelsea recorded a heavy defeat during their opening premier league game as they were whitewashed 4 goals to nil by arch-rival, Manchester United at Old Trafford.

The Blues had difficulties in carving open the Reds Devils defence line up and resorted to taking long-range shots.

Also, they hit the woodwork a record of 21 times last season and as such were the team with the highest woodwork target last season.