A Twitter user, Boluere has taken to the micro-blogging platform with claims that the PR Team for Common Wealth of Zion Assembly, COZA are reporting influencers accounts who have been vocal about their senior pastor, Biodun Fatoyinbo and COZA rape allegations.

“If your account was suspended you were most likely very vocal about Biodun Fatoyinbo and COZA rape. Check it. Yea i just confirmed that COZA PR team is reporting influencer accounts oh.

Pastor Biodun Fatoyinbo, Senior Pastor of the Commonwealth of Zion Assembly, COZA, has returned to preaching on the pulpit.

Fatoyinbo pulled a large crowd on Sunday as members were seen screaming and jubilating as he climbed the stage for the first time since Busola Dakolo accused him of raping her.” 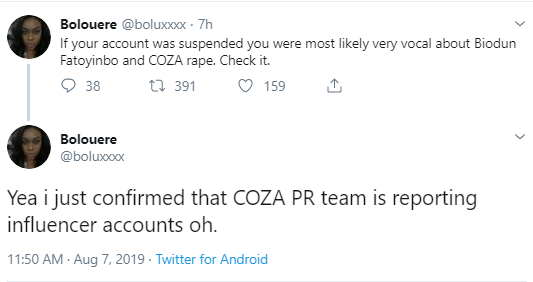