A report claiming that Nigerian singer, Kizz Daniel is expecting his first child with a Nigerian model and former girlfriend of Davido went viral on various media platforms.

The model, Ade Williams has taken to her Instagram page to react to the rumours in a bid to clear her name.

Information Nigeria recalls it all began when the lady had initially put up a post on social media about a piece of news she wanted to break but needed courage.

In her recent post, Williams stated that she is aware of the news saying;

“It has come to my attention that some news has been going on about my involvement with Kiss Daniel and Davido and same is false.

And I will respond to the source of the misinformation in due course.”

Read Also: “Men Touching Me Are My Fans, Let Them Enjoy Me” – Pantless Dancer, Zodwa Wabantu 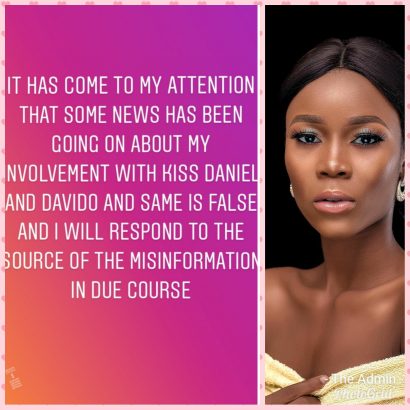