Nigerian award-winning producer and mavins boss, Don jazzy has shared a picture via his Instagram page with the honorary NBA trophy in the US. 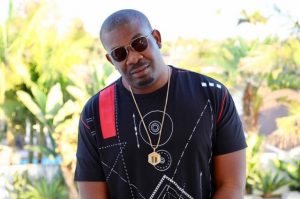 Don Jazzy is known to be a proactive businessman and many have claimed he will be venturing into basketball deals, however, they have not been any claims he went there for business rather than entertainment and leisure.

the producer extraordinaire said in his caption: