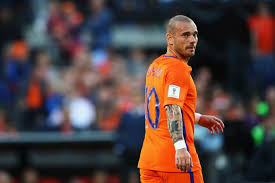 The 35-year-old who enjoyed spells at Ajax, Real Madrid, Inter Milan, and Galatasaray among others has most recently been in Qatar, playing for Al-Gharafa.

Sneijder, who was regarded as one of the best-attacking midfielders in the world in his prime, began his career at Ajax before earning a move to Real Madrid in the summer of 2007.

Also Read: Dear Ladies, You’re a Bank Not Bae If Your Man Keeps Borrowing Money From You — Omokri

The Dutchman contributed 11 goals and 11 assists in 66 appearances during his two seasons in Spain, winning a La Liga title before departing for Inter Milan following the signing of Cristiano Ronaldo.

At Inter, he won a treble under Jose Mourinho in 2010 before playing a huge role in Holland’s journey to the World Cup final that summer. He played a record 134 caps for the Netherlands and is also the player with the most assists for his country.