A Facebook user Victor Udochukwu Duru has taken to the platform to narrate the story of how a young man he accommodated and fed allegedly fled with his credentials, international passport, and other valuables.

According to the Facebook user, he is ready to pay anybody with useful information that leads to the mans’ arrest.

Narrating their relationship, he said he met the man as a stranded person before helping him get a job and also housed him. 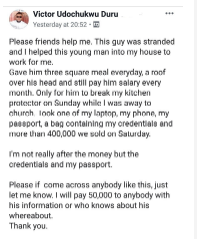