Apostle Johnson Suleman, the General Overseer of Omega Fire Ministry, has shared the story of a man who suddenly discovered that two of his five kids are not his.

According to the respected cleric, two are from his family doctor who has been having secret affair with the wife.

He further added that the man is contemplating divorce as he doesn’t know what to do simply because he has grown to love the kids so much.

“A man suddenly found out his 5 kids are not entirely his…2 are from his family doctor who has been secretly having affair with his wife..he wants a divorce and sends the kids(9/11) away. tho he has grown to love them so much…WHAT DO YOU THINK?..” 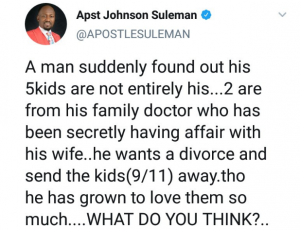