A Twitter user @thatphcboy has opined that men disfiguring women is an act of ownership. According to the user, the men feel they own their wives and as such if she is going to leave then he is entitled to take away her beauty from her.

Speaking via his Twitter handle, the man went on to share a story of how his aunty’s husband scalded her body with a pressing iron and walked free till he died.

Read what he shared below:

Men disfiguring women is an act of ‘ownership’, I own you and if you are going to leave me, I will make sure your beauty is taken away from you. I always remember my aunty and how the man she married held her and scalded her entire body with a pressing iron.

Then he tried to use a kitchen knife to pluck out her eyes and he almost succeeded. She fought him off and ran into the kitchen which she locked, he then locked up the house and fled. Neighbours had to pry open the burglary proof to get her out.

She was in the hospital for almost 4 months with several surgeries to repair her skin. There is still a giant scar by her left eye where he stabbed while trying to pluck her eyes out. This man went unpunished until he died, her family merely returned the dowry he paid. 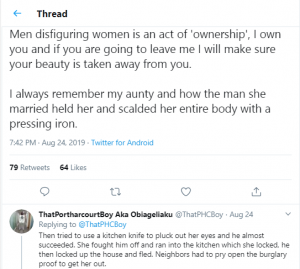