Home Metro News ‘My Degree Is Not Going Up With Me To Heaven’ – Last...
Facebook
Twitter
WhatsApp

A 200 level student of the Department of Chemistry Education, ATBU Bauchi, Salmat, has reportedly lost her life just an hour after she posted a chilling message on her Whatsapp status.

According to reports, Salmat was killed alongside 4 others when a pedestrian bridge at the Abubakar Tafawa Balewa University (ATBU), Gubi Campus, collapsed on Monday night. The bridge had collapsed due to the heavy downpour that day.

Report has it that Salamat and some of her colleagues were reading at about 10pm in the classroom when the rain started and they decided to hurry back to the hostel.

However, just before they climbed the pedestrian bridge, Salamat updated her Whatsapp status which read thus;

“My degree will not go up with me to heaven. Therefore, I will not come and kill myself over school. If I don’t know it by 11.30pm, I am resting my head peacefully on my pillow and going to sleep” she wrote. 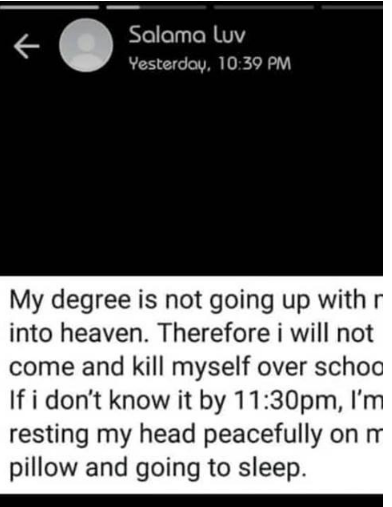