A Twitter user @somadina_ has taken to the micro-blogging platform to share the story of how her aunt committed suicide because of a loveless marriage.

According to the user, the couple got married only 4 years ago.

My aunt just committed suicide☹️😪 all because of marriage without Love.

She got married to this guy 4 years ago after dating him for as long as I can remember. He does nothing substantial, she pays the rent bought the car for him, funded the wedding and gives him money.

We know he does not love her enough to marry her and we believe it was forced on him cause she’s a stubborn and don’t agree. He cheats on her with different women and girls which she kept on complaining to family and she was advised to focus on her life and kids after he refuses to listen to advice to stop cheating on his wife.
She’s very beautiful and has it all when it comes to that. Last month he made an attempt on her 18 years old sister living with them and that broke her heart. She filed for a divorce
Thinking it will make him sit up and be sober for his actions but no he went ahead with it and they dissolved the marriage, it wasn’t up to 3 days after that he married the neighbor and took the 2 kids and ran away to Jos.
Which led to her shock and depression. She lost herself
Deep into depression, nothing ever made sense to her, she stopped eating and speaking to anyone. We all advised and kept praying for her, and last two nights she couldn’t take it anymore she took the rat killer medicine at home and it killed her. She’s a good singer,
Full of life, always happy and laughing. I could still hear her laughter and her sweet voice. please if you don’t love someone don’t marry them and if you know you are not loved enough for marriage don’t force it on the guy or the lady. Thank you
Thank you all for your prayers and concern
See her tweet below: 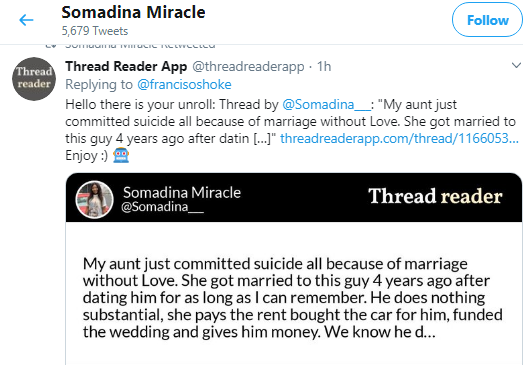