Oloye Akin Alabi, a House of Representative member has slammed a critic who accused him of posting a video on his social media page when the country is in disarray as a result of Xenophobic attack on Nigerians living in South Africa.

Replying the critic, he asked him whether he is mad before going on to query if he can not post his own teaching video again.

He further asked if the critic intends to be unfortunate before concluding by asking if he intends to use him for media clout.

See their exchanges below: 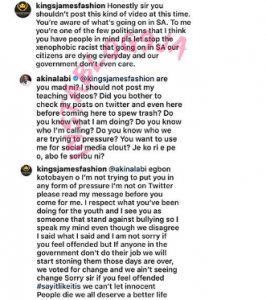