Former minister of education, Oby Ezekwesili has revealed that the decision of President Muhammadu Buhari to constitute a council of economic advisors led by Professor Doyin Salami was copied from America.

Recall that on Monday, President Muhammadu Buhari constituted a council of economic advisors to be chaired by Professor Doyin Salami, while former Central Bank of Nigeria (CBN) governor, Professor Charles Soludo is a member.

The former minister of education, however, hailed the decision to set up this council she described as a copy from America.

She went further to urge the members of the committee to tell the president that he has mismanaged the country for the last four years.

The setting up a Council of Economic Advisors is in itself one of the features of the American Presidential system which we copied.
Strong membership& that’s really great.
I hope the first thing they do is tell the President how he mismanaged the Economy in the last 4 years. /1 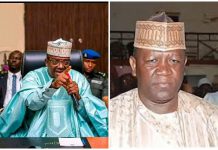