The church of Satan and Wale Gate, a popular UK based comedian, on Tuesday clashed on social media after a lady who claimed to have served the devil for 990 years said that the game of football is Anti-Christ.

Reacting to what the lady said, the comedian sent the Church of Satan a direct message on Twitter, asking if the lady really served the devil for that long and the church replied ”No.”

Read Also: Woman Who Served Devil For 990 Years Says Football Is The Game Of The Antichrist (PHOTOS)

Not satisfied with the response, the humour merchant further asked if they pay her pension for such long service and the Church of Devil replied; ”Crazy people say crazy things. Hardly a new revelation. Not much else to say about it.

See screenshot of their exchange below: 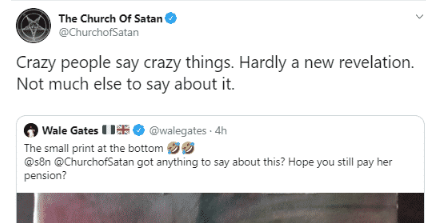 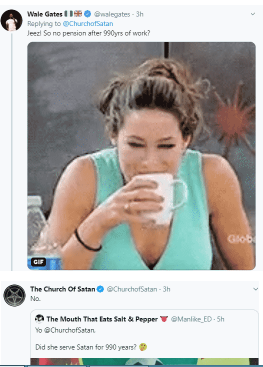