Shatta Bandle, a popular Ghanaian dwarf who became a viral sensation after he declared himself richer than Aliko Dangote has finally arrived Nigeria.

The viral personality has been sighted arriving in Lagos.

Upon arrival, Shatta Bandle was greeted in the airport by a number of people, including airport officials who wanted to see the “famous richest man in Africa.”

Shatta Bandle has made audacious claims that he is the richest black man on earth and his business partner is Microsoft boss, Bill Gates.

Watch video of his reception below: 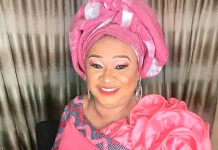