Popular Benin based activist, Harrison Gwamnishu, has shared the story of a Nigerian man who is now languishing in the police net for allegedly raping his stepdaughter.

Narrating her ordeal to the investigating officer, the victim said her mum and stepdad told her that the act is to make her vagina ready enough for the job ahead of her.

She added that she found out that the job ahead of her is that they have concluded plans on how to ship her off to Italy where she would engage in prostitution and child pornography. 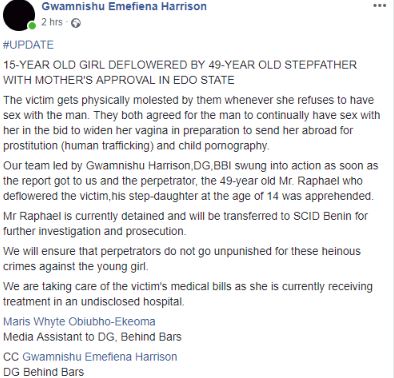 Watch the video of the victim’s narration below: