A Twitter user @oluyemifasipe has taken to the micro-blogging platform to share the story of how Adetutu, a staff of First Bank branch in Akure, the state capital, was murdered by suspected hired assassins.

According to the user, the suspected hired assassins disguised as customers before opening fire on her after she took to her heels.

Adetutu was a staff of the FirstBankngr branch in the Akure city – where she worked based on contract – in charge of the Point of Sale (POS) ordering.

I was told that her assailants who came in a motorbike disguised as customers lurking to transact business in her terminal.

The yet to be identified killers gained entry into her terminal and ordered everyone to lie down on their faces before she was attacked.

They first attempted to strangulate her but she bolted – to raise an alarm, and as she ran out to escape death, the armed men went after her and shot her twice on the chest.

These hoodlums left with nothing in the shop as there were money and other valuables in the shop- raising the suspicion that they must have been “hired assassins” contracted to kill Adetutu.

Adetutu has been buried in accordance with Muslim rites but her killers must not go freely. Justice must be served, her killers have murdered sleep in the face of her parents, families and loved ones. Rest in peace Adetutu. May your killers never know peace. 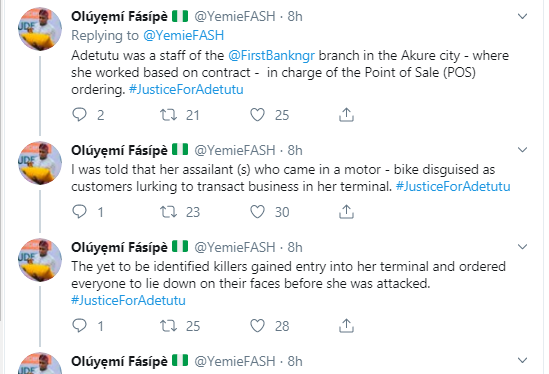