Home Lifestyle Is TECNO About To Release Another Camon Just Before The End Of...
Facebook
Twitter
WhatsApp

The continued success of the TECNO Camon series smartphone is very impressive. Close watchers of the brand know that it has continued to enjoy year-on-year growth.

Well-known across Nigeria and Africa, TECNO has positioned itself in such a way that it is a part of the different aspects of the life of the average Nigerian. As a form of solidarity, this expresses the message that TECNO is for Nigerians. Students and young professionals love it for its great camera and smooth style. TECNO Camon 11 Pro boasts a 16MP + 5MP Dual Main Camera and a 24MP Selfie Camera. Little wonder it is one of the best-selling phones of the TECNO brand, but what MORE can we expect from the TECNO Camon series in the coming days?

We got a hint that TECNO is working on a new Camon that will be released a couple of days from now. What can we look forward to if the hint is anything to go by? 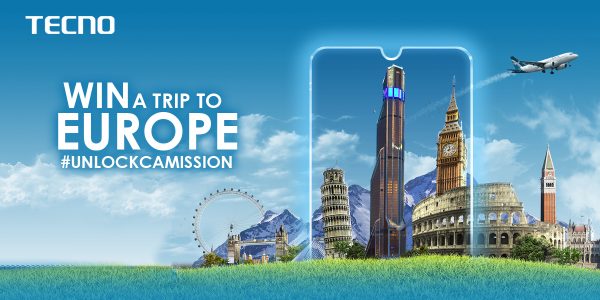 It is normal for TECNO to reward its Camon customers with an exotic trip. The Camon 11 launch was rounded up with a trip to Dubai and Seychelles. The brand is teasing a trip to Europe which means we can expect the release of the new Camon any moment from now.

Will the new instalment in the TECNO Camon series feature an AI Triple camera? Or maybe something better? What will it be called? Camon 11S, 11XS or 12? Whatever it is you expect; you and I know the brand won’t disappoint. After all, we hear their new slogan is Expect More. So, what more can we expect?

With the increased use of videos and large apps, having more RAM and memory space has become so important! We look forward to TECNO adding more storage space to the next Camon. We can confidently say that the brand won’t release a new smartphone with anything less than 64GB RAM. So, get ready to freely download all your heavy apps! Wait. All that heavy app usage, video recording, streaming and downloading is going to consume a lot of power. That calls for…

If you were expecting me to say power, sorry to disappoint you. Don’t get me wrong-a large battery is a great idea – but it doesn’t come without its risks and costs. Not to mention the added weight. For me, fast charging is more important, so long as my phone battery is not terrible. Fortunately, according to information reaching me, the new TECNO Camon will come with a fast-charging feature.

With all the expected features I have listed, plus fast charging, the deal is sealed for me. I’m buying it. At this rate, I won’t be surprised to learn about an increase in sales growth at the end of the year. More is the only thing you can expect from Africa’s most preferred smartphone brand. Can someone please tell me when the new TECNO Camon will be released?