Nollywood actress, Angela Okorie recently received a death threat on her son from a fan of Mercy Johnson for branding her a witch.

This is coming after a fellow actress, Sonia Ogiri opened up on how Mercy Johnson bullied her years ago on a movie set.

Angela Okorie was spotted in the comment section, claiming Mercy treated her same way and when she confronted her, the actress began fighting her “spiritually and physically”.

The comment seems to have sparked outrage as fans of Mercy Johnson stormed her page while some went straight to her DM.

“Angela hmmm you have bite the wrong meat accusing Mercy Johnson of attacking you spiritually I give you seven days to go back and apologize for your lies or else your son will die.”

The curvy actress, who wasted no time in sharing a screenshot of the message, prayed against the death threat on her son and rained curses on the person wishing her death. 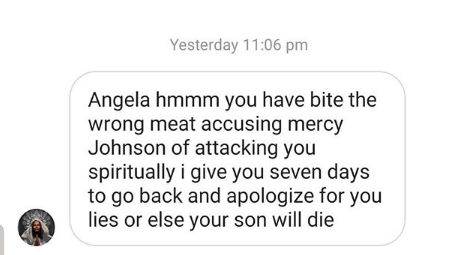