Joro Olumofin, a popular Nigerian relationship expert, has shared the story of a lady who contacted him over claims that her boyfriend sees her climbing on top of him during sex as a sign of disrespect.

According to the story which he shared on his Instagram page, the lady revealed that the boyfriend is 18-year older than her and that they met in the church.

Read Also: I Can’t Remember The Last Time I Had Sex: Cossy Orjiakor

According to the confused lady, she said she loves going on top during sex but he warns her never to try it again anytime she tries it.

Read the full story below; 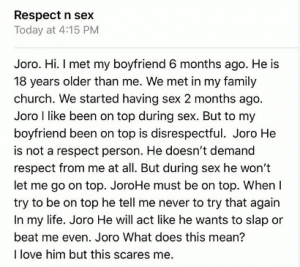