Following the now-viral news that a serial killer is on the prowl in Porth Harcourt, a lucky victim who escaped death by a whisker has come out to share her ordeal.

According to the lady, she was coming back from work when she entered a Keke Napep and she was held at gunpoint and asked to follow them.

She added that the killers on citing her church’s hand band pushed her out of the moving Keke Napep. 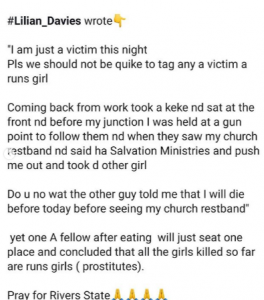