The drama between Nollywood actress, Toyin Abraham, and colleague, Lizzy Anjorin, is set to get messier as the former has shared that the latter would soon hear from her lawyer.

The drama started after Lizzy Anjorin accused Toyin of opening fake Instagram accounts with the intention of using them to attack her fellow colleagues in the industry and also tagged her a ”lying bastard.”

Toyin in her reaction said she is shocked that Lizzy mentioned her name directly the drama despite that the account which attacked her belongs to a fan.

See what she posted below; 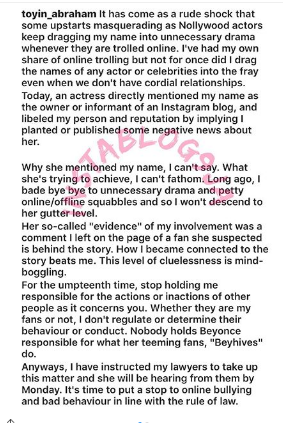