Nigerian musicians, Vector and Peruzzi have slammed South African rapper, AKA over his insensitive remarks on the recent Xenophobic attacks in his country.

This is coming after the South African hip hop star and Nigerian rapper, Ycee had attacked each other on Twitter due to the manner at which South African rapper, reacted to the renewed attacks on Nigerians and other nationals in South Africa.

A Nigerian Twitter user had challenged the South African musician over the attacks, to which he sarcastically replied saying:

“Cancel us then. We’ll stay here in Sandton and suffer.”

The rapper’s comment caused a stir online and it caught the attention of Vector and Perruzi.

Vector educated him while Perruzi told him shut the fuck up. 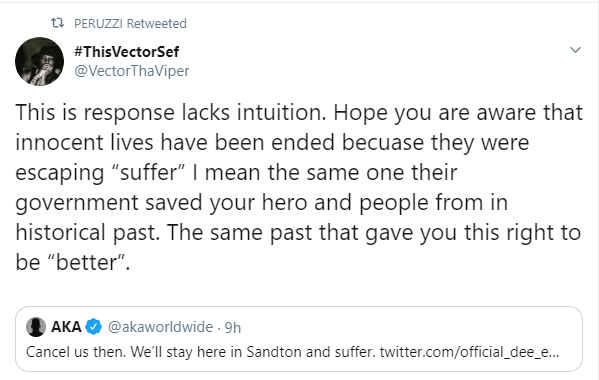