Recall that we reported that a man named E-Money promised to gift Tacha N20m on Monday because his daughter cried following her eviction from the reality TV show, well the said man has made a u-turn.

According to the man who spoke via his Instagram post, he queried how he would just gift the controversial former BBNaija housemate N20m when it wasn’t like she came to work on his farm.

Tacha was evicted from the show on Friday following violent conduct. 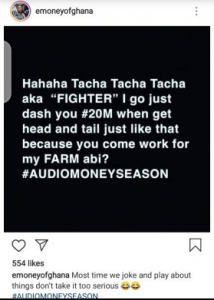